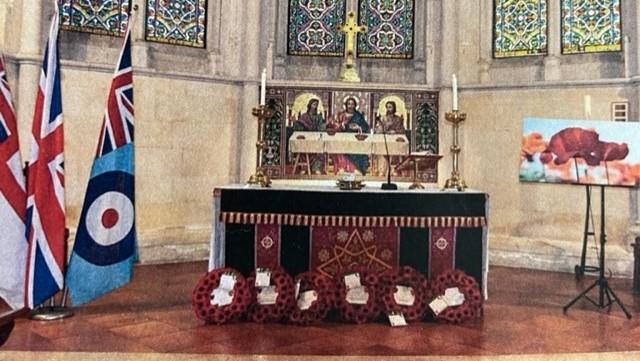 This year I commemorated Remembrance Day with a mass at Christ Church, Naples, Italy together with many of the NATO service men and women. The church was built on land provided to the UK by Garibaldi as a “national gift” in 1860 in appreciation of the support given by the English in the liberation of Naples.

In America, November 11 is to celebrate the lives of the living veterans. In Europe, 11 November is Remembrance Day - lest we should forget what transpired during WWI.

Remembrance Day (also known as Poppy Day, owing to the tradition of wearing a remembrance poppy) is a memorial day, observed in Commonwealth member states since the end of the First World War to honour armed forces members who have died in the line of duty.

The dictionary defines remember to bring to one's mind an awareness of (someone or something from the past).

Thanks to new military technologies and the horrors of trench warfare, World War I saw unprecedented levels of carnage and destruction. By the time the war was over and the Allied Powers claimed victory, more than 16 million people - soldiers and civilians alike - were dead.

Yet, just a few years later in 1939 the world was in conflict once more - World War II!

The world was intent on remembering and forming alliances to ensure freedom and democracy.

While we are remembering at a mass in Christ Church, Naples, children of service members are reciting poems they were asked to write at school. Poems about the sacrifices the families of service members have endured to ensure freedom for us all. It was humbling to note the understanding of such horrors that even the very young children had.

2022, as we remembered - the Russia / Ukraine conflict continues.

As I sat in my pew, my thoughts and prayers were with the families and service members, we had recently supported during the Invictus Games in The Hague. Each one with their own story, their own spirit of determination to succeed in the game of life. I watched an amazing marksman in archery with one arm use his teeth and mouth to compensate for the loss of the other arm. An entire team playing volleyball using both arms to compensate for the lack of function in their legs. An entire team playing wheel-chair rugby with the same aggression one would find on a Rugbyfield with no wheel-chairs. No holding back, no pity for oneself. Strong men and women just getting on with life. Then there are the invisible disabilities that can make being out in the real world a very definite challenge. PTSD. Accommodations may be made for those with visible injuries, but when the general public can’t see injury, accommodations or tolerance will be offered by the very few. During the games I worked with a young lady who told her story about how her father broke down and shared some of his challenges with PTSD only after he’d watched the opening ceremony of the Invictus Games. Every day wounded warriors are out in the real world as a minority among us men and women who take our freedom for granted. For them to have this occasion where they can come together and be part of an organization which accommodates their shared experiences, understands their challenges, understands their determination and what it takes to just participate in these games is very touching. A Yellow Bench, an iconic symbol from the 2022 Invictus Games in The Hague was placed at the venue to emphasize the importance of connecting with each other. Whether it was an acquaintance, a friend or more often than not, a complete stranger, participants had the chance to sit down and have a conversation. This iconic symbol was very inspirational after the long Covid isolation. Remember! Being part of the Invictus Games showed me the meaning of love, compassion, heroism, resilience, determination, comradery, passion… passion for life!

I remember … and then I remember the last stanza of a poem written by Wilfred Owen in 1920 after WW1.

If in some smothering dreams, you too could pace

Behind the wagon that we flung him in,

And watch the white eyes writhing in his face,

His hanging face, like a devil’s sick of sin;

If you could hear, at every jolt, the blood

Come gargling from the froth-corrupted lungs,

Obscene as cancer, bitter as the cud

My friend, you would not tell with such high zest

To children ardent for some desperate glory,