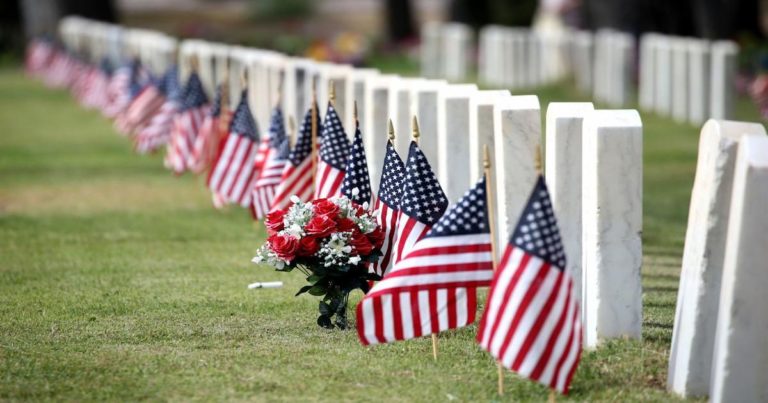 Image -
Honoring the men and women who died while serving in the U.S. military
Maryse Larché Mele
|
29/5/2022

Memorial Day is an American holiday, observed on the last Monday of May, honoring the men and women who died while serving in the U.S. military. Memorial Day 2022 will occur on Monday, May 30.

Originally known as Decoration Day, it originated in the years following the Civil War and became an official federal holiday in 1971. Many Americans observe Memorial Day by visiting cemeteries or memorials, holding family gatherings and participating in parades. Unofficially, it marks the beginning of the summer season.

The civil war, which ended in the spring of 1865, claimed more lives than any conflict in U.S. history and required the establishment of the country’s first national cemeteries.

By the late 1860s, Americans in various towns and cities had begun holding springtime tributes to these countless fallen soldiers, decorating their graves with flowers and reciting prayers.

Some records show that one of the earliest Memorial Day commemorations were organized by a group of formerly enslaved people in Charleston, South Carolina less than a month after the Confederacy surrendered in 1865. Nevertheless, in 1966 the federal government declared Waterloo, New York, the official birthplace of Memorial Day.

This is a time for reflection, for symbolism, for communities coming together to decorate graves, or organize Memorial Day ceremonies.

Each one of us have our own personal reflections. Each quite different from the other. In order for a ceremony to be meaningful, the organizer needs to put much thought into the symbolism that will touch the hearts of those in attendance – each in their own personal way. The flag, the anthem, flowers and flags on a graveside are symbols that those of us who are lucky enough to enjoy our freedom today, take the time to acknowledge and remember the ultimate sacrifices of those who have gone before us. This is also a time to recognize many of the service members who are still battling with their own personal journey to recovery. It is a time to remember those family members, fathers, mothers, brothers, sister, sons, and daughters who struggle with the loss of their loved ones.

Sometimes during a ceremony, we will arrange a fly-over at just the right moment in order to honour exceptional service. While this may sound like a very routine organization, it is actually quite difficult to get the timing right. During the many years I served as a NATO guest on a US Navy base in Norfolk, VA we did many ceremonies with fly-overs. There was the usual banter between the services. I often heard, “it takes a navy pilot to get the timing right!”. We had people posted on the roof of the building in front of our flag plaza where our ceremonies were held and who were in radio contact with the aircraft doing the fly-over. Each part of the ceremony had to be perfectly timed to provide an exact time for the fly-over to occur. The fly-over was the exclamation mark at the end of the General’s speech. It could not happen in the middle of the speech. There can be no pregnant pause after the speech as we wait for the fly-over to occur. It needs to be in synch with the General’s last words.

Memorial Day is a personal commemoration. We each have our own story. I have many friends today, who have served in Vietnam, Kuwait, Iraq, Afghanistan and so on. Today, I would like to share the experiences of Ty Smith who made a speech at my brother’s graduation ceremony about his own personal journey to recovery. He has buried more than 50 of his friends and struggles with PTSD. He has finally come to realize that their death cannot be in vain. He has realized he is the legacy they left behind and he has to continue to evolve and get through his grief to ensure their death was not meaningless.